“Titus Groa” – the first part of a trilogy about the Gormenghast castle. Mervyn Peake universe subtly changed: just tune in to the gloomy atmosphere of the Gothic novel, a text turns into a family saga with Dickensian sentimentalism, then everything melts into a surreal haze, and the author ironically alludes to the avant-garde ideas of psychoanalysis. 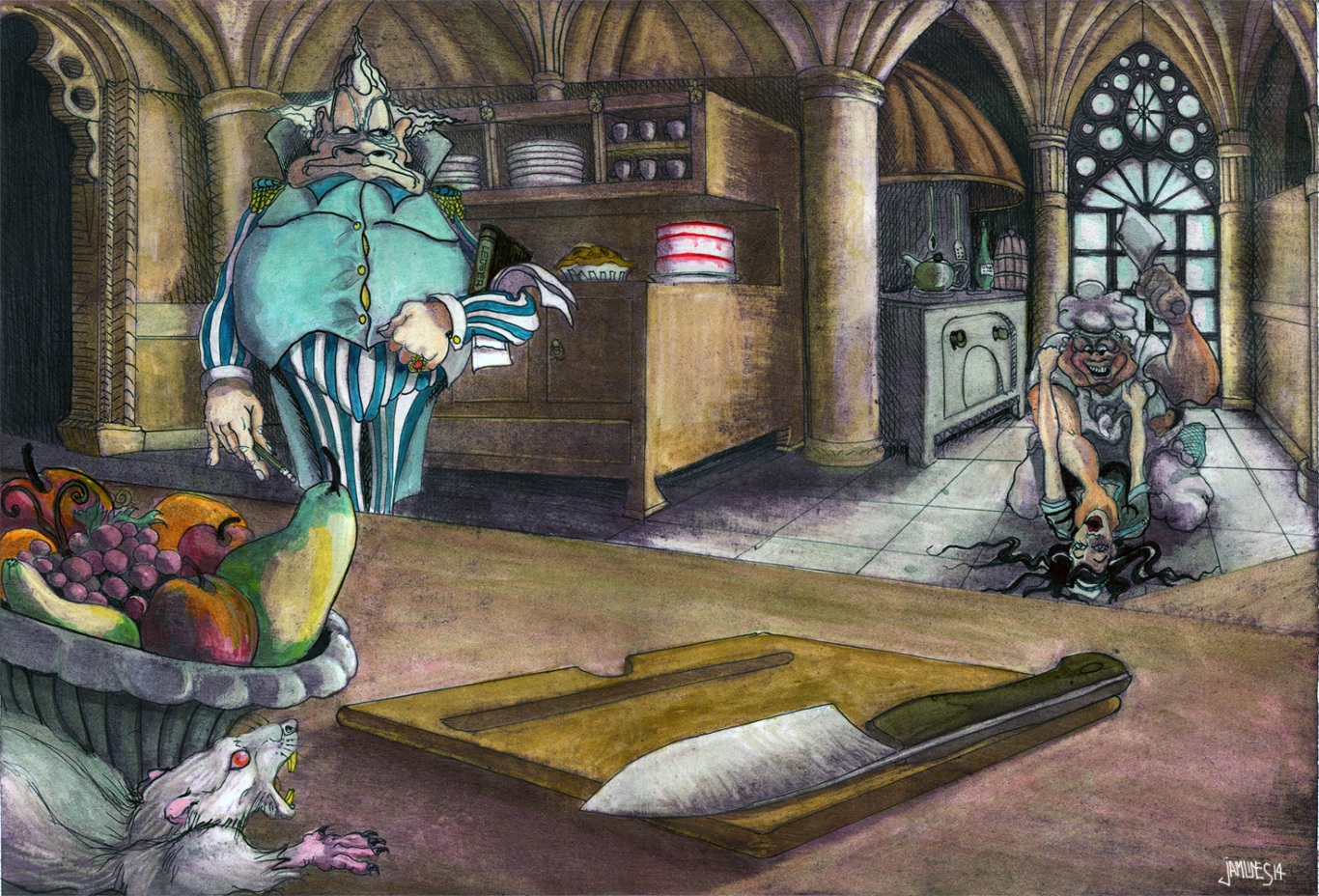 The closed world of regulating every action of its inhabitants does not contain the slightest hint of country in which the events occur. Everyone has their own associations; I think the novel heroes resemble graphic images of Francisco Goya, the more that the author studied pictorial art system. “The sleep of reason produces monsters” – obsessively comes to mind a picture of the famous Spaniard, it appears that it depicts not a casual person, and the owner of the castle. Awesome silhouette of an owl swooping straight at the viewer – that in such a creature turns losing the mind Lord Groa. Splash genuine terror can be overcome by reading the stage of progressive mental illness: Count demands to bring mice dinner, going to build itself a nest of twigs and hooting like an owl walks on the mantelpiece. All this happens in front of her daughter. Little vibrant Fuchsia – the lightest among the phantasmagoric image of the characters in the “Caprichos” style.

Author organically and skillfully balances between realism and contemporary delights, trying them one at a trendy new clothes. The text reminds transparent lace, through which can be seen a second reservoir of images, thinking the reader alone. The whole storyline covers the period of two years from the birth of an heir to the family of the Lord before the official declaration of a capricious kid Titus Groa new owner of Gormenghast. The fenced off from outside influence citadel life goes by strict rules that in varying degrees deforms the personality of the main characters. The text is taken from a lot of psychological thriller – a deadly duel chef and valet comes amid somnambulistic wanderings Lord Groa, under his crazy monologue in the shifting light of an old lamp. Lady Groa experiencing inexplicable aversion to the violet eyes of his son, he was expelled to the back of her mind and fully entrust the care of nurses and nurse. Noble lady prefers a society of people retinue sleek cats and devotes all his time feeding the birds. Even reasonable valet Flay looking for secret signs in the mystic phenomena of birds flying down to the child’s cradle.

All the inhabitants of the castle – his voluntary prisoners. Some fall almost suspended animation as the caretaker of the hall Bas-relief, sleep most of the day in a hammock. Others burned by ambitious aspirations, hoping to climb the social ladder, cleverly building up suspense and leaving a bloody trail. The latter include cookee Steerpike, became the evil genius of the castle. It has the charm of a negative, which makes the reader sympathize with all criminal adventures.

Echoes of social parody can be seen in the existence of humiliating slavery carvers of wooden sculptures. For nineteen years in their eyes the joy of life disappears, it sublimates in the works (so says one of the characters of the novel). Doomed to see each neighbor and pal competitor, the creators of primitive figures every year are experiencing the collapse of his dreams – if they do not get in the top three favorites, all results of work are burned in the sacrificial flame obscure ritual. The unenviable fate of the best works and they are gathering dust in the museum, useless and inaccessible. In this episode, there are some hidden motive of the author’s attitude to the “art for art’s sake.”

By the way, before I really had no idea that Mervyn Peake – this is the illustrator of the canonical edition of “Alice in Wonderland”, which is constantly criticized for violating the proportions and composition. However, I see it as a unique Wizard to transfer images to a verbal Lewis Carroll’s pictorial book graphics language. Finally, I’m not quite sure, “Titus Groa” can be classified as science fiction – from the genre in the text we find perhaps that timeless and spaceless existence of Gormenghast Castle…

Common questions Contributing Lifehacks Other Popular guidelines Tips and recommendations Trending
We use cookies to ensure that we give you the best experience on our website. If you continue to use this site we will assume that you are happy with it.AcceptPrivacy policy